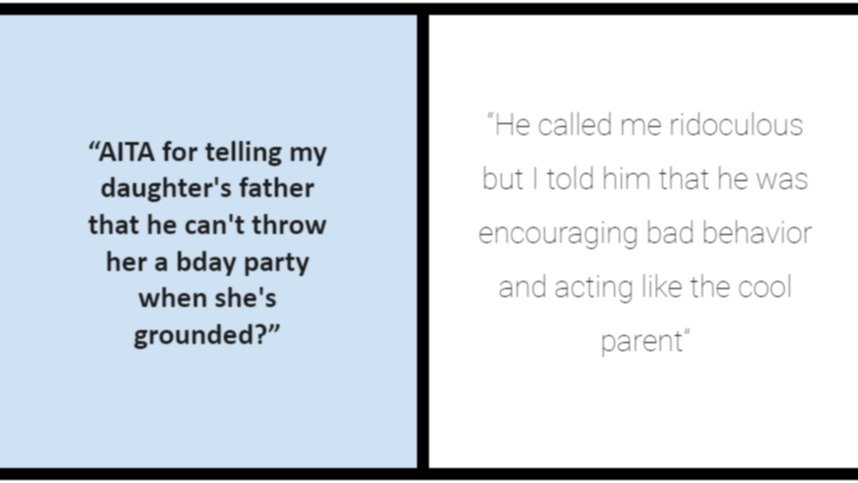 Co-parenting, as many will agree, comes with its ups and downs. When two parents don't see eye-to-eye on an issue, the situation can be heightened. One of the stories shared in the AITA community on Reddit took a similar tone to the above discourse, and it has left the original poster in quite a dilemma. The OP, who described herself as the mom of a fifteen-year-old teenager, stated that she and her ex-partner with whom she shares parenthood had a bit of a scuffle over her birthday party. This wouldn't have been a thing if the teenager had not been grounded, but it seemed her dad was adamant about throwing a party. Here's a look at the build-up of the story.

The Teenager Was Grounded 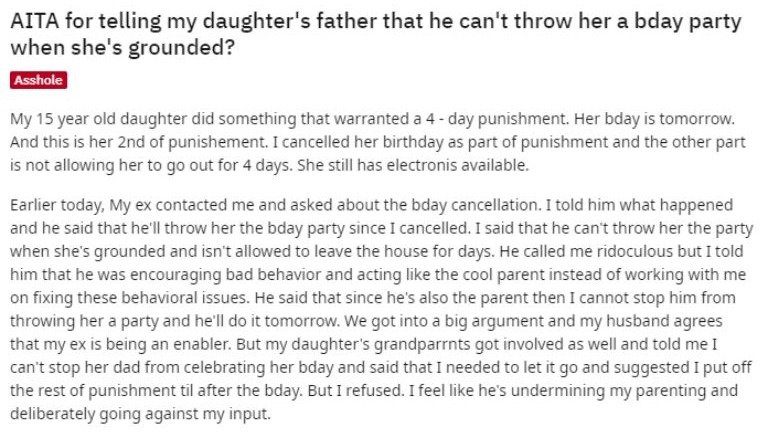 Her Birthday Fell During The Punishment

It turned out that the daughter's birthday fell on the day she was grounded and prohibited from stepping out of the house. However, her dad seemed to have a different opinion. The narrator explained that her ex called to ask about the plans for their daughter's birthday, but she made it known to him that she was serving punishment and the party was canceled.

This did not sit well with the father who thought the Reddit mom was being ridiculous with the weight of the punishment. He then informed her that he would go ahead and throw a party for their daughter, and things pretty much escalated from there. The OP accused her ex of acting like he was the cool parent while making her seem too extra. She noted that if the young girl was allowed to party, it would seem as though they were encouraging her bad behavior.

Her ex saw no reason with this, as he insisted that he would go ahead to throw a party. However, the mom stood her ground noting that the celebrant would go through the four-day punishment. She later told her husband about the situation and he agreed with her that the ex was indeed encouraging bad behavior.

Soon enough the grandparents intervened and agreed with the girl's father noting that the mom should allow him to throw the party. They also suggested that the punishment could be postponed till the day after the celebration. The Redditor stated that she refused and insisted that her daughter stay grounded on her birthday. Ultimately the narrator felt like her ex-partner undermined her parenting method and deliberately made things difficult for her. Redditors share their input:

Punishment Is Considered Too Drastic

Op Did Not Make A Good Parenting Choice