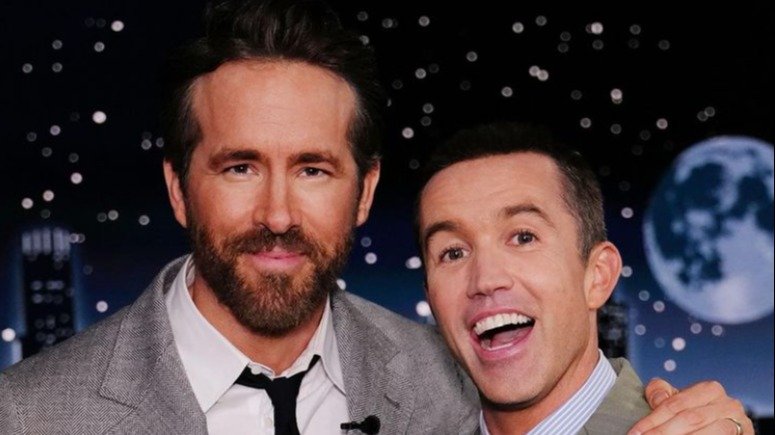 Hollywood actors Ryan Reynolds and buddy Rob McElhenney in an unlikely and courageous teaming, decided they wanted to be the owners of a failing soccer team in Wales and forked out a whopping $3 million in 2020 to do so.

Despite being completely oblivious about the business of soccer, the Deadpool actor and It’s Always Sunny in Philadelphia alum faced all the odds (including Reynolds’s wife, Blake Lively, who couldn’t quite wrap her head around such a knotty undertaking) to not only purchase one of the oldest professional soccer teams in the history of the sport but also document the experience.

Now their story of winning over arguably Britain’s unluckiest soccer club for £2 million (US$3.4 million) in November 2020 is the focus of Welcome to Wrexham, a heartwarming and funny six-part documentary on Disney+, FX, and Hulu.

Reynolds And McElhenney Had Never Met Before Buying The Club

Reynolds and McElhenney appeared on The Late Show With Stephen Colbert to take curious fans through their funny journey of officially now owning the ‘Wrexham Association Football Club.’

“Rob called me with this idea, and I was just immediately taken. It was just so unexpected,” Ryan said. “Explaining it to my wife was crazy. One of the craziest things I’ve ever had to explain, but I got hooked, I got into it.”

Ryan then added, “And then … We had never met before we actually bought [the soccer team], yeah…” but Colbert’s animated look of disbelief stopped him from continuing. “What, did you just text him and say, ‘Do you want to buy a football club’?” the host inquired.

“No no, it’s so much worst!” Ryan interjected. “I slid into his DM Stephen! Like some sort of creep, saying, ‘Hey I love your show. You’re great on your show and the next thing I know he texts me back and says thanks …” and well, the rest was history.

“I Googled, How Do You Buy A Sports Franchise?”

When Colbert asked the guys, “How does one go about buying the team? Do you just call and say ‘Do you guys want to be bought?’ or is there a notice on Craigslist or something? How does one … how do you get a team?”

McElhenney replied, “I Googled, ‘how do you buy a sports franchise?’ … for real.”

Ryan And Rob Are The Real Deal

Convincing everyone that they were serious about buying the Welsh soccer team wasn’t an easy feat for Ryan and Rob. Critics objected that the plan was always to make the documentary rather than having a genuine interest in Wrexham.

“The challenge was people looking around and thinking, ‘What are these guys doing here?’ ” McElhenney told The Sydney Morning Herald. But the two were truly moved by the story and history of the soccer team.

McElhenney, who was born working-class in Philadelphia and supports the Philadelphia Eagles NFL team, said that he was inspired by the Netflix documentary Sunderland ’Til I Die, about the club’s relegation from the English Premier League competition. The film’s story of people coming together to save a club resonated with the actor. “I knew those people; I grew up with them,” he explained. “The thing that crushed me was the theme song of the Sunderland documentary written by local singer Martin Longstaff about his grandfather.”

The song’s lyrics include, “All your life you worked your fingers to the bone, you worked hard for every little thing you owned.” When McElhenney heard them, he turned to his wife on the sofa and told her he would buy a football club. The problem, as he says, is, “I’m only in TV. I needed a movie star with millions.”

As fate would have it, he had just met Reynolds in a weird DM exchange and thought of the Golden Globe nominee. Reynolds is a businessman, who owns a gin company and a phone company, so it was a no-brainer to present the idea to him – in a message on Twitter.

“I think Rob thought of my gin as a sponsor first,” Reynolds says. “But I said, ‘What if we just drove off the cliff together?’ ”

“The age-old tale of addiction is that you go into it with this casual approach and then you come out completely changed and ravaged,” Reynolds said. “Football has done that to me. For better and for worse. I think they should make some sort of patch for it.”