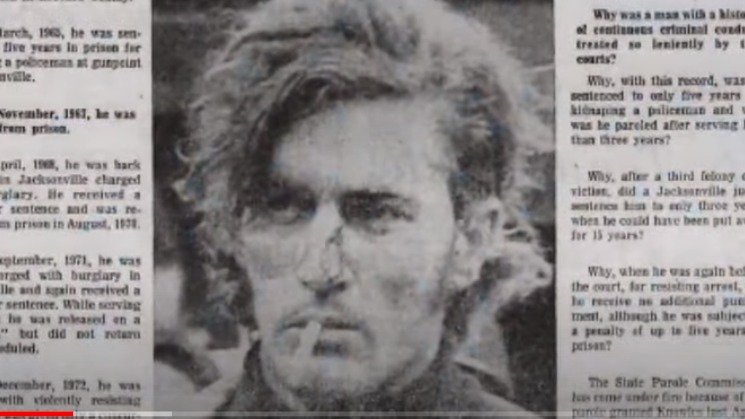 Because he struck right around the same time as serial killer Ted Bundy, Paul John Knowles largely went under the radar.

Yet the man, who some described as handsome and charming, was terrorizing victims in Florida and Georgia, and beyond.

Paul John Knowles went on to become known as the “Casanova Killer" for his crimes.

Knowles is accused of indiscriminately shooting and strangling men, women, children, and elderly people during a seven-month period in 1974. In some cases, the deaths involved sexual assault.

He was formally accused of murdering four people in Georgia, two in Florida, and one in Ohio, the Atlanta-Journal Constitution reported. But investigators believe he killed at least 18 people and maybe as many as 35. No one is sure of an exact number.

Knowles Started Killing After Getting Out Of Prison In 1974

Authorities believe Knowles started his killing spree in the summer of 1974 after he picked a lock and escaped from his jail cell in Jacksonville. At the time, he was serving a sentence for stabbing a bartender.

His first known victim is believed to be retired Jacksonville Beach teacher Alice Curtis, 65, who died the night of his escape from jail after being bound and gagged during a robbery.

Knowles Admitted To Many Murders In Taped Confessions

Much of what authorities know about the crime spree comes from his own taped confessions. Five girls, ages 6 to 12, disappeared within three months in 1974 around the time of Curtis’ death.

On the tapes, Knowles claimed to have murdered a teenage girl named "Alma," who investigators concluded was 13-year-old Ima Jean Sanders, who disappeared on August 1, 1974, in Warner Robins, Georgia, and whose skeletal remains were found in April 1976.

Knowles claimed he was responsible for the death of two girls, Annette Anderson, 11, and her sister, Mylette, 6, but some investigators have questions and doubts about the validity of that claim.

He Killed Many People Over A Span Of Four Months

The killing spree continued largely in Florida and Georgia but stretched to other states as well.

On Sept. 3, 1974, he murdered Ohio Power Company executive William Bates after meeting him in a Lima watering hole, and he shot and killed two elderly campers in Nevada about two weeks later.

He killed a beautician in Alabama named Ann Dawson on September 23, 1974, Karen Wine and her 16-year-old daughter Dawn in Connecticut on Oct. 16, 1974, 53-year-old Doris Hosey in Virginia, and Carswell Carr and Amanda Carr, a father and daughter in Georgia who had opened their home to him.

On November 16, Florida Highway Patrol Trooper Charles Eugene Campbell recognized the stolen car near Perry, Florida. Knowles was able to wrestle the officer's gun away and took him and a passing driver, James Meyer, hostage. Knowles took the two men into a wooded area in Georgia and shot each of them in the head.

While police were close on his tail, Knowles still somehow managed to get away during the police chase.

Knowles was cornered on November 17 by a civilian with a shotgun and then taken into custody.

Knowles never went to trial for the crimes he was accused of.

Paul John Knowles met a violent end like so many of his victims when he was shot and killed by police on Dec. 18, 1974, near Lithia Springs in what police called an escape attempt. He was in the car with two police officers when he tried to flee and they shot him in response.