Salma Hayek Is A Turquoise Vision In Bikini 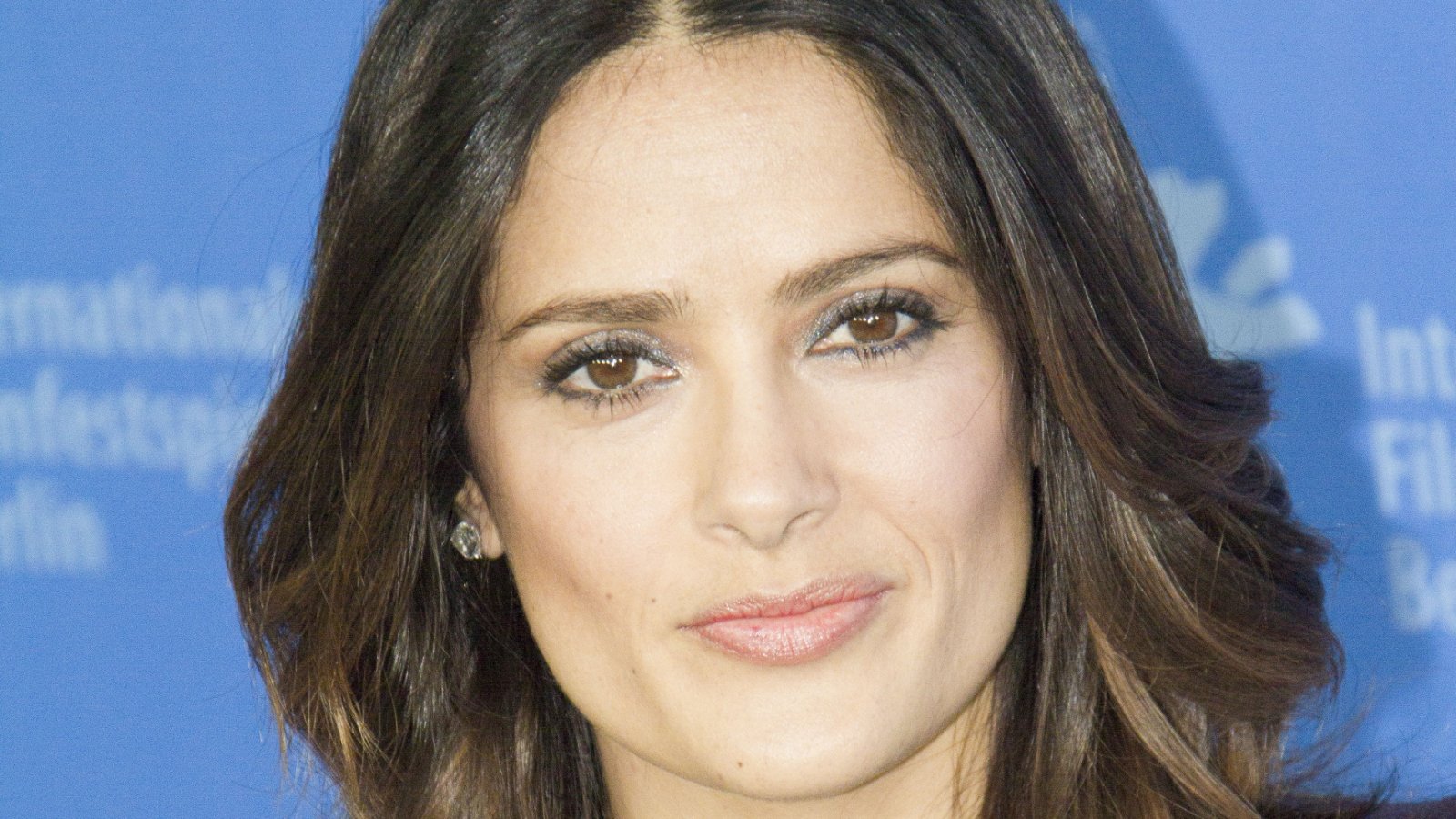 We love a good throwback and nobody can top Salma Hayek in that regard. The undisputed queen of "Throwback Thursday" delivered in a big way yesterday, stunning her 20.5 million followers on Instagram with a glorious bikini shot straight out of tropical heaven.

A big fan of the #TBT trend, Hayek is known for keeping fans on their toes with incredible poolside views in designer swimwear. Her recent swimsuit looks are no less thrilling, with the House of Gucci actress scoring over 1.3 million likes in an azure-blue one-piece for her 55th birthday in September.

See her birthday pic below and scroll down for the throwback! 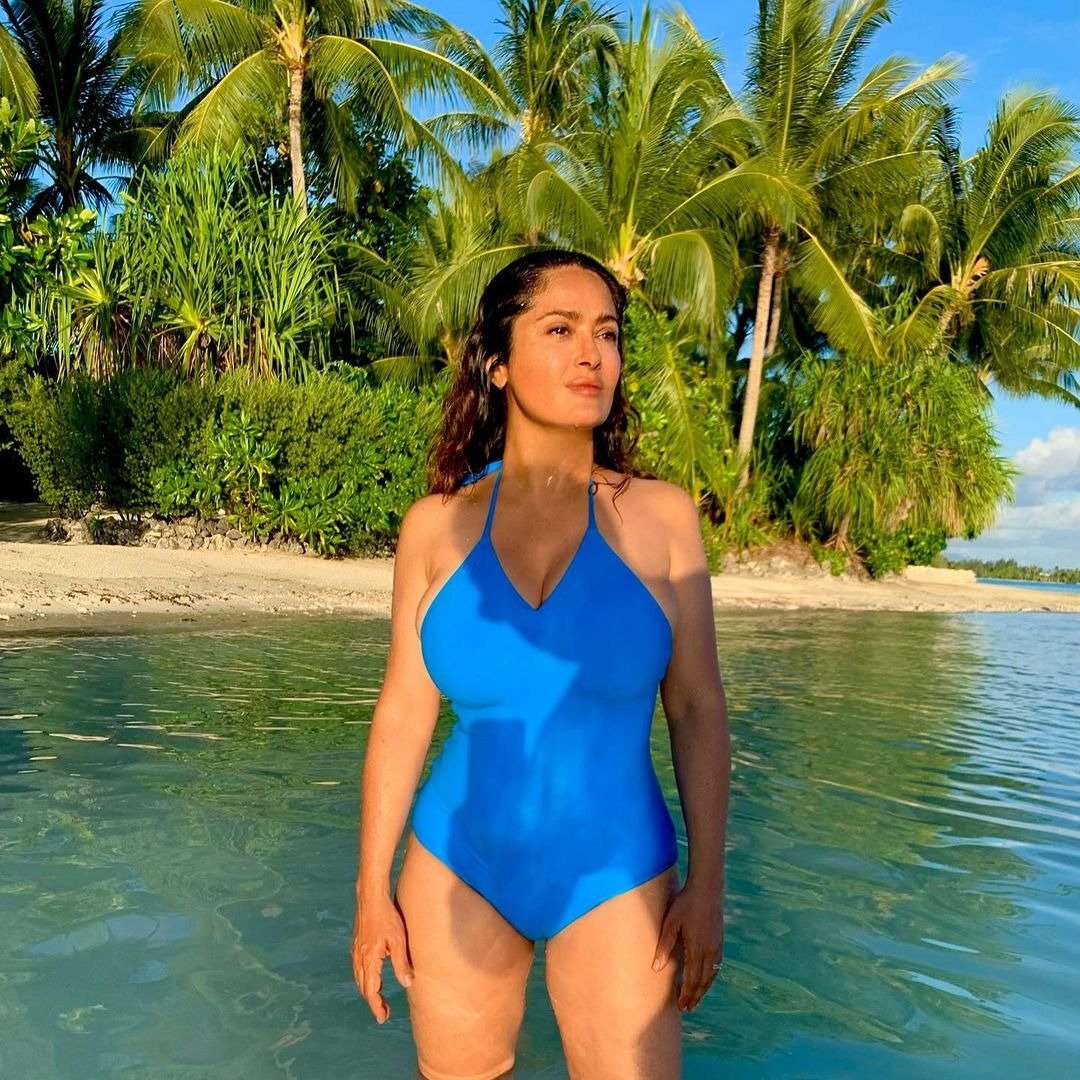 Proving that blue is her color, Hayek dropped jaws in a turquoise two-piece in her latest offering, with a high angle flaunting her hourglass figure in full. Snapped in the shallows of a circular pool, she was captured on her tummy mid-swim in a graceful floating pose with her legs perfectly stretched back and her arms cutting through the crystal-clear water.

While Hayek in a bathing suit is a win for the internet on any given day, it was the angle and framing that made the picture into a masterpiece. Bordered by a neat double coping filled with white rocks, the resort-style pool led onto a narrow stretch of beach creeping into a thicket of tropical vegetation. The wide view put extra emphasis on Hayek's sculpted silhouette, complemented by the lush greenery in the blue bikini.

Keep scrolling for the throwback! 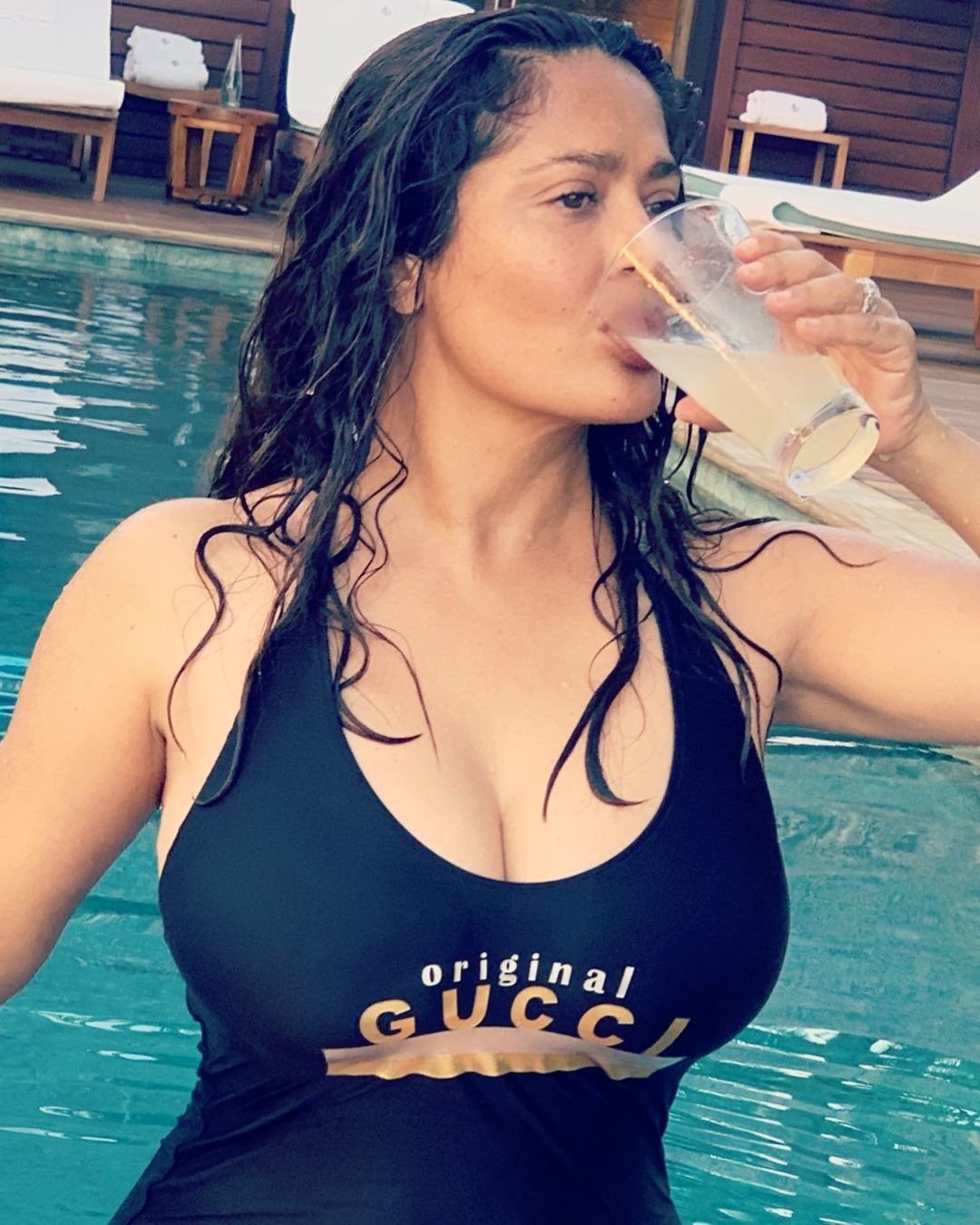 As expected, fans eagerly showed their appreciation for the upload scoring 312,600 likes in just 11 hours of posting. Many took to the comments to gush over the "magnificent view" and liken the ageless beauty to a "fine wine."

"the pool looks magical," one person said of the paradisiacal scene.

"This is your paradise, and you are my paradise," quipped another follower.

While her throwbacks are no short of attention-grabbing, it's Hayek's candid swimsuit selfies that bring, in the words of Vogue, "a rare kind of #instamood." Dubbed by the magazine "everyone's favorite swimwear influencer," the silver-screen siren brought her A-game in a black Gucci one-piece back in November as she repped her House of Gucci movie with a cool drench in the pool.

"This is not my wardrobe for 'House of Gucci' but I highly recommend it anyway," Hayek, who plays psychic Giuseppina “Pina” Auriemma in the Ridley Scott film, captioned the photo that upstaged the entire press tour. 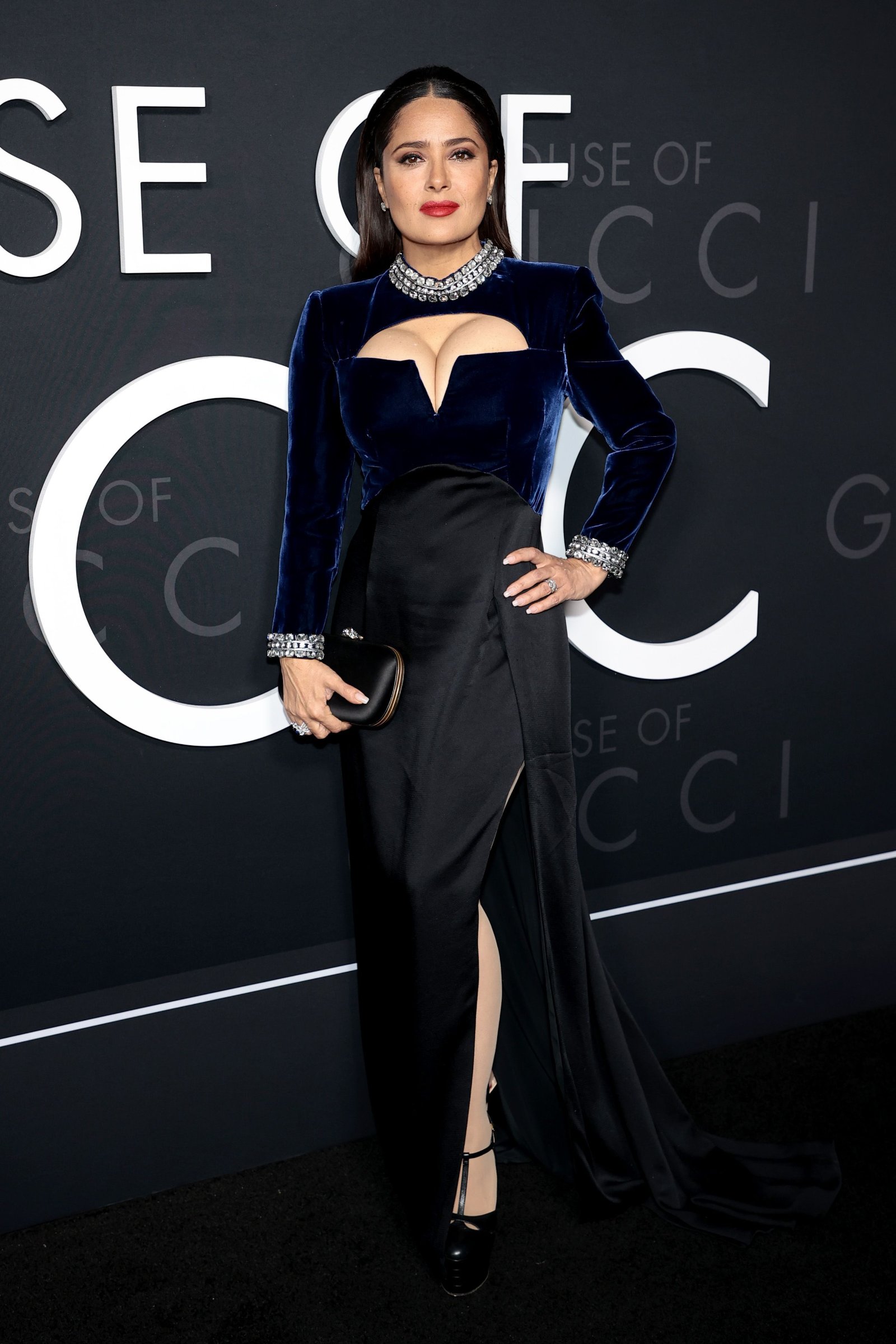 Snagging a cast Screen Actors Guild Awards nomination for the movie along with Lady Gaga, Jared Leto, Adam Driver, Jack Huston, Jeremy Irons, and Al Pacino, Hayek celebrated the win on Instagram. Sharing a clip in which she was hugging Gaga at the New York premiere, she congratulated her co-star for her solo SAG nomination. She also included a photo with Leto, who scored a solo SAG nomination, as well.

"Congratulations to @ladygaga an [sic] @jaredleto for their @sagawards nomination as well to the rest of the @houseofguccimovie cast who SAG also nominated for an outstanding performance by a cast in a motion picture," Hayek captioned the post.

Though famously snubbed at the Oscars, House of Gucci did earn an Academy nomination for "Best Makeup and Hairstyling," along with several other accolades at the BAFTAs, AACTAs, Golden Globes, and more. With a stellar cast of Oscar winners and nominees, including Hayek, the movie's Academy Awards snubs grabbed headlines earlier this year. Hayek and Gaga's deleted kissing scene also made the news, with many fans no doubt anxiously waiting for the director's cut.

"So honored to be part of the cast of @houseofguccimovie who just got nominated for the AARP Movies for grownups awards in the category of best ensemble cast," Hayek announced on Instagram in January, posting a group photo with the cast at the London premiere. 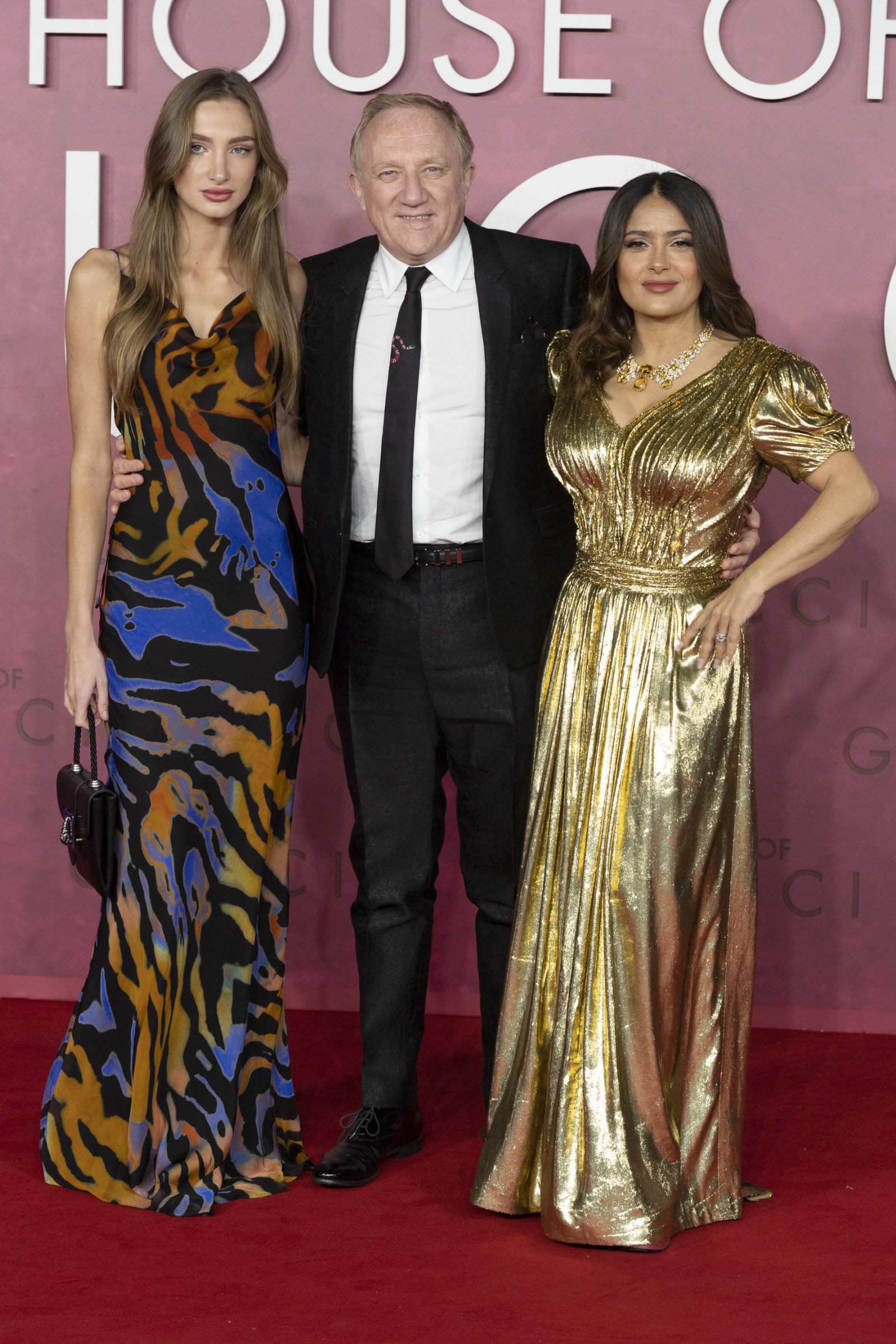 Hayek's ties to the Gucci label go beyond her role in the eponymous movie. The movie star is married to Kering CEO François-Henri Pinault, who owns multiple top fashion brands, including Yves Saint Laurent, Alexander McQueen, Bottega Veneta, Balenciaga, and, of course, Gucci.

Pictured above with her husband and his eldest daughter, Mathilde Pinault, on the House of Gucci red carpet, the glamorous actress, who shares 14-year-old daughter Valentina Paloma Pinault with the billionaire French businessman, is frequently fronting Kering brands on her Insta page. Welcoming the New Year in bold cheetah-print YSL swimwear, Hayek served curves and style poolside with a cup of coffee and a panoramic view.

Another notable kerching for Kering on her feed was a pink sequin Gucci look she showcased in a cheeky selfie.